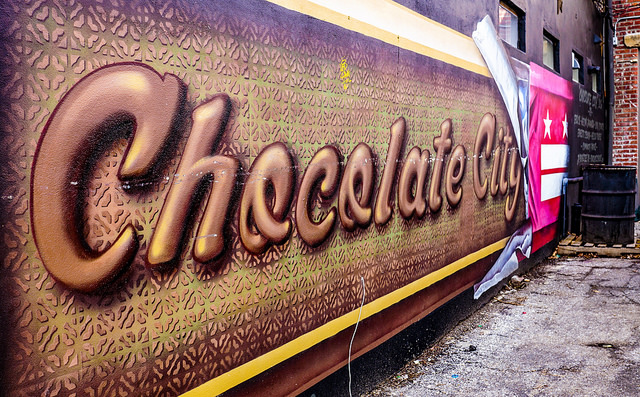 The new book “Chocolate City: A History of Race and Democracy in the Nation’s Capital” wrestles with two major contradictions at the heart of Washington, D.C.’s history. First, how could the capital city that symbolizes freedom for so many be a site of slavery and racial segregation for so long? And second, how can citizens of that capital city be denied basic voting rights and political representation that the rest of the country enjoys? We wrestle with those questions and more as we look at the history of race and racism in Washington, D.C. and how the past impacts the present state of the Capital.

Excerpt from "Chocolate City: A History of Race and Democracy in the Nation's Capital"

Copyright © 2017 by Chris Myers Asch and George Derek Musgrove. Used by permission of the University of North Carolina Press.

Surely nowhere in the world do oppression and persecution based solely on the color of the skin appear more hateful and hideous than in the capital of the United States, because the chasm between the principles upon which this Government was founded, in which it still professes to believe, and those which are daily practiced under the protection of the flag, yawns so wide and deep.—Mary Church Terrell, 1906

Washington, D.C., seemed to be at its finest on August 28, 1963. Despite dire warnings of racial violence and chaos, the city welcomed more than 250,000 peaceful protesters for the “March on Washington for Jobs and Freedom.” Amassing near the Lincoln Memorial, the crowd listened to an interracial lineup of inspirational speakers, culminating with the dynamic young preacher from Alabama, Martin Luther King Jr. The civil rights movement had come “to this hallowed spot,” King insisted, “to make real the promises of democracy.”

Across the world viewers saw newsreels of King’s speech and images of the smiling, sweating, sign-toting throngs who represented a broad cross-section of America—black and white, young and old, Northern and Southern, Jew and Gentile. The march was vivid evidence of vibrant American democracy in action. Beautiful, orderly, and welcoming, the nation’s capital appeared to be the ideal staging ground for what King called “the greatest demonstration for freedom in the history of our nation.”

At the end of the day, most protesters piled onto buses to head back home, but roughly 10 percent of the march participants already were home. They were D.C. residents, natives of a city that was at once a shining symbol of America and a glaring rejection of democracy. Unlike other U.S. citizens, D.C. residents had no representation in Congress and lacked basic self-government. Theirs was a city run by three presidentially appointed commissioners, not locally elected officials. Washingtonians of all races had no voting rights that any elected representative anywhere was bound to respect.

King’s call to “make real the promises of democracy” struck a particularly resonant chord in D.C. because it was the first majority-black major city in the nation. The crowd at the March on Washington may have epitomized an ideal of interracial unity, but D.C. itself was in a state of racial turmoil and flux. Just three years earlier, the Census Bureau had given statistical confirmation to the massive demographic transformation that was remaking the city. In 1950, D.C. claimed more than eight hundred thousand residents, almost two-thirds of them white; by 1960, the city had lost a third of its white population and was roughly 54 percent black.

White neighborhoods and schools that a decade before had been protected by restrictive covenants, federal law, and social customs now were almost entirely black. As jittery white families left Washington, city planners pushed “urban renewal” plans that paved over the majority-black neighborhoods of Southwest D.C. with highways to all-white suburbs, generating racial bitterness and spawning neighborhood protest movements. A new generation of black activists and their allies challenged federal and local authorities to provide adequate housing, equal educational opportunity, and basic political rights for the black majority. To such activists, the March on Washington only highlighted the vast gulf between the ideals that Washington represented and the realities that D.C. residents faced.

As black educator Mary Church Terrell articulated at the turn of the twentieth century, no city better captures these ongoing tensions between America’s expansive democratic hopes and its enduring racial realities than the nation’s capital. Contentious racial issues that have challenged our nation—from slavery to civil rights to urban violence—have played out with particular symbolic and substantive power in D.C.

Yet Washington is not simply emblematic of our larger national struggle for racial equality. It is a city like no other in the country, and its racial history is a peculiarly fascinating tale. Created by constitutional fiat and controlled by Congress, the District of Columbia is the voteless capital of a democracy, a seat of government highly sensitive to shifts in national politics, a city situated in the South but torn politically and culturally between North and South. Unlike other major Eastern cities, it was planned from the beginning and grew under the watchful gaze of national leaders. Almost alone among Southern cities, D.C. was home to a strong and public abolitionist movement, and its educated free black community made the city a beacon of black opportunity even during slavery. In contrast to other urban areas, it failed to develop any meaningful industry aside from government and did not attract a substantial population of white immigrants. Cosmopolitan yet parochial, emblematic yet unique, D.C. has served as a symbol of America yet stood apart from the nation.

Chocolate City traces the political, economic, and social history of race and democracy in this extraordinary city, from its inception as a slave capital through the racially tinged mayoral election of 2010. In that time, the city experienced massive transformations—from a sparsely inhabited plantation society into a booming metropolis, from a center of the slave trade to the nation’s first black-majority city, from a self-governing town to a federal fiefdom and back again. It has endured corrupt leadership and congressional meddling, weathered the Civil War and the crack epidemic, and survived urban renewal and multiple waves of gentrification.

Race is central to Washington history, so Chocolate City is not solely a history of D.C.’s African American community. Instead, we explore how questions of race and democracy have shaped life in the capital city for residents of all races. Thus we begin the study with the first racial battles to envelop the region, those between European settlers and Native Americans, and end with the twenty-first-century demographic revolution that is dramatically reshaping the city’s racial contours.

Race, above and beyond other factors (including class, region, politics, and religion), has proven to be the most significant explanation for social, economic, and political divisions in the city. Race may be a social and historical construction with little basis in biology, but it is also a powerful lived reality that has influenced how (and where) Washingtonians of all races have lived, worked, voted, and interacted. Since the city’s inception, race, racial tensions, and the changing racial demographics of the city’s population have been animating forces in the lives of capital city residents.