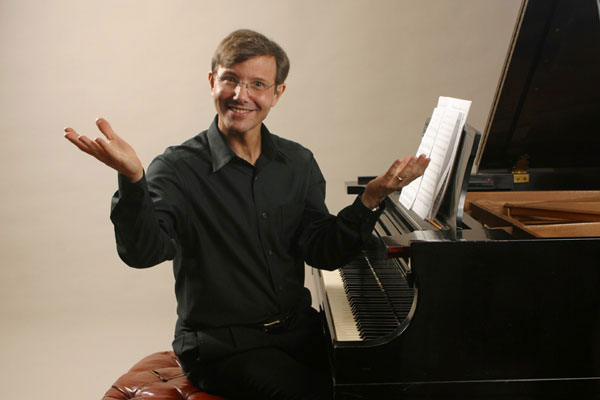 Rob Kapilow is a composer of music for children and adults, including "Monuments at the Millennium," a piece commissioned by the Kreeger Museum that captured The District in music at the turn of the century. Courtesy of Rob Kapilow / Peter Schaff

Kojo For Kids welcomes composer, conductor and author Rob Kapilow to the show on Monday, March 8 at 12:30. Listen live by streaming the show on this page or by tuning in to 88.5 FM in the Washington, D.C. region. Kids can call in with questions at 800-433-8850.

When Rob Kapilow told his son he was a composer, the then six-year-old looked puzzled and replied: “Daddy, daddy, you can’t be a composer. You’re not dead!”

Kapilow understood why his son believed this. Many kids’ idea of a composer is a guy who wrote music centuries ago, music that is often hard for kids to appreciate.

It was this moment of misunderstanding that inspired Kapilow to begin writing music for kids, music that respects their intelligence but also appeals to their young ears. He put beloved children’s books to music, including The Polar Express, Green Eggs and Ham and Gertrude McFuzz. Now known as “the pied piper of classical music,” his FamilyMusik program has brought live music to kids at concert halls across the nation.

He’s also the author of acclaimed books on music, including the newly released “Listening For America: Inside the Great American Songbook from Gershwin to Sondheim.”

We welcome him to the show, and also the students of Long Branch Elementary School in Arlington, Virginia. We’re eager to hear their questions for Rob Kapilow, and yours too — if you’re a kid.