The Sights And Sounds Of The March On Washington

The Sights And Sounds Of The March On Washington 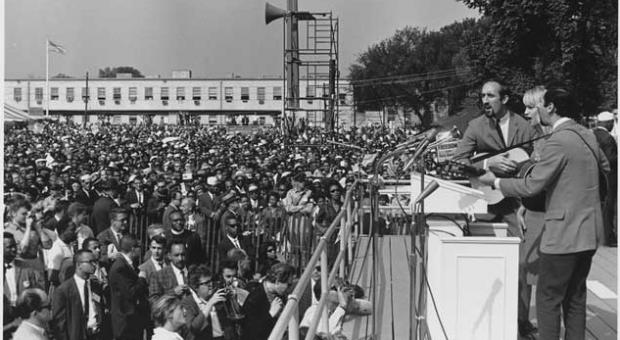 Peter, Paul and Mary perform at the 1963 March on Washington. (National Archives)

During the March on Washington for Jobs and Freedom, famed contralto Marian Anderson, folk-trio Peter, Paul & Mary, and singer-songwriter Bob Dylan inspired and engaged the crowd with protests songs and folk ballads. In the crowd that day a young photographer from The Daily Tar Heel snapped some images that captured the mood of the crowd. On the 50th anniversary of the March, we take a look and listen back to the music that served as a soundtrack of the day and the images that standout from the crowd.

WAMU: Behind The Scenes Of The March On Washington

People listening to WAMU 50 years ago heard live reports like this one about the scene on the National Mall. Reporter Malcolm Davis describes the scene where “quite a large crowd is gathered,” and notes the variety of lunch counters and comfort stations. “Most of the people around here seem to be comparatively tired after what has probably been a very long night’s journey from one place or another,” he added.

Folk trio Peter, Paul & Mary performed “Blowing in the Wind” on stage. Here’s what WAMU listeners heard 50 years ago at the march.

Folk singer Odetta performed “I’m On My Way” at the March on Washington, as heard by WAMU listeners 50 years ago.

Ledger Smith, also known as “Roller Skate guy,” who skated from Chicago to the March on Washington.

This clip starts with a description of the scene — 100,000 people had arrived at that point — and then goes into an interview with Jackie Robinson.