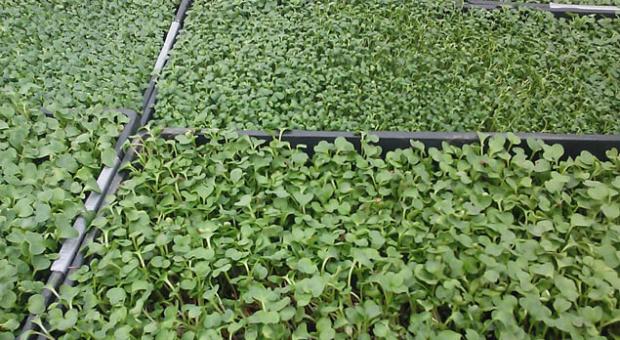 From grocery aisles to gourmet restaurants, dark, leafy greens are the trendy “superfoods” of the moment. Demand for greens like kale has fueled interest in new varieties of these nutrient-packed veggies, and growers are responding. In our region, farmers are stocking markets with exotic varieties of familiar standards, but they’re also introducing customers to mizuna, tatsoi, shungiku and microgreens. We find out how leafy greens are changing both our plates and our palates, and learn more about the healthy benefits these tiny leaves pack in one mouthful.

Smaller than “baby greens,” microgreens can be sweet, spicy and sour and pack a nutritious punch. Once used mainly as garnish, microgreens are now commonplace at upscale markets and farm stands. Interact with this graphic to learn more about how mature salad greens stack up to their micro versions.

Pancetta is Italian bacon that is cured with salt and spices but not smoked.

Wash the dandelion greens well in several changes of water, as they are often gritty. Finely sliver one half of the greens and put them in a large salad bowl.

Bring water to boil in a large skillet or sauté pan and add about a teaspoon of salt. Add the remaining uncut dandelion greens, reduce to a simmer and cook until the greens until tender, about 5 minutes. Remove the greens from the water and drain well in a colander. Chop coarsely and set aside.

In a large skillet, heat some olive oil and add the garlic and pancetta. Cook over medium heat, stirring constantly, until both are golden in color. Remove and discard the garlic. Add the cooked dandelion greens to the pan and sauté for about two minutes. Whisk the eggs and scramble them with the greens and the pancetta. Season to taste with salt and pepper.

Dress the raw dandelion greens with some olive oil and vinegar. Season to taste with salt and pepper. Top salad with the scrambled eggs, pancetta and dandelion.

Devein the Swiss chard by removing the leaves from the stalk. Rinse well and chop into small pieces. Set aside.

In a saucepan on medium high heat add oil, garlic cloves, red onion, and bell pepper. Sauté for 1 minute. Add the Swiss chard and cook 3-5 minutes or until the chard is wilted. Pour lemon juice over mixture and toss. Serve immediately.