In Takoma Park, A Costume ‘Census’ Is A Halloween Tradition 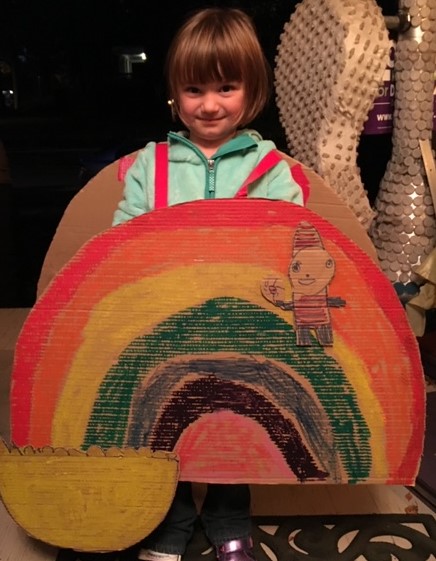 When Jill Feasley started counting the trick-or-treaters who knocked on her door, it was for purely logistical purposes.

“When I lived on Capitol Hill, I didn’t know how many kids to expect,” she said. “I wanted to keep track of how much candy I should buy the next year.”

After a few years, Feasley realized there was an opportunity for something more.

“I fully cop to being a D.C. wonk,” said the former director of Meals on Wheels of Takoma Park. Feasley thought the data could be interesting, both as a way of tracking culture trends and as a compilation to share with her community. She began writing down the costume of every trick-or-treater who arrived at her door.

Fealsey has since moved from Capitol Hill to the Penhood neighborhood in Takoma Park and now shares her annual Halloween costume census via the neighborhood listserv.

“Coming to my house is as much a tradition as the trick-or-treating,” she said proudly.

Feasley says most of the costumed ghosts and goblins (or rather ninjas and cats in recent years) are between the ages of four and 12, with a handful of creative teenagers and adults thrown in.

“I ask every single kid to tell me about their costume,” Feasley said. “They put a lot of thought into their costumes and assuming takes away from that.”

This dedication to the details has led to entries in the costume census like the truly epic 2018 “Mermicorn (a mermaid/unicorn combo)” in 2018 and the inspired 2014 data point for “Zombie Rosie the Riveter (Yes We Can Eat Brainz!).”

Feasley’s editorial comments add to the joy of reading the list. On a Deatheater costume, she commented “quickly dispatched when I summoned my Patronus.” In 2009, when only one child dressed as an athlete, Feasley theorized “Could it be our local sports teams are scary enough all on their own?”

Feasley has classified Mary Poppins as a princess (“Not really a princess but she has a regal bearing”) and put the “Notorious RBG,” a hip-hop persona of Supreme Court Justice Ruth Bader Ginsberg, in the same group as Wonder Woman and Batman (“a superhero to so many”).

While Feasley is the first to admit her methodology is far from scientific, her tally has allowed her to track which costumes have gained or lost popularity. Classics, such as ninjas and cats, fluctuate but typically fare well from year to year.

“Witches and vampires and zombies have stayed pretty consistent,” she said. “They’re always the biggest ones. Unicorns are trending now.”

“It was later at night and it was an older teenager, in a basic hoodie and jeans,” Feasley recalled. ‘When I asked him about his costume, he lit up and pulled a little toy plane out of his pocket. He was an aircraft carrier.”