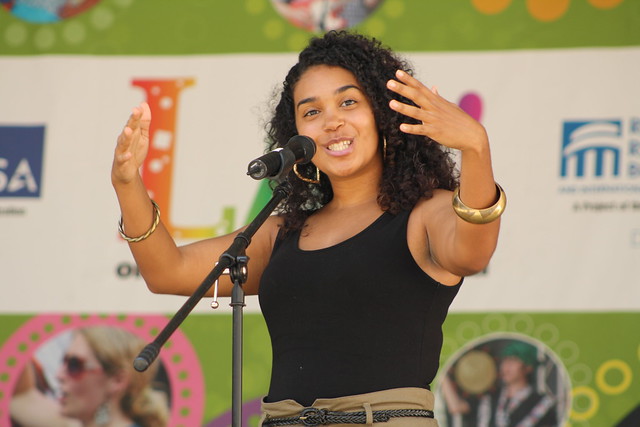 If you’re not already a fan of spoken word, performances can be kind of hard to describe in just words. They’re a combination of poetry, theater and…well, maybe you should just watch a couple videos to get a sense of what they offer. D.C. hip hop and spoken word artist Ayinde Sekou shared four of his favorites with us.

Malachi Byrd was on the D.C. Youth Slam Team in 2013 and 2014 and is now a student at Princeton with a couple chapbooks on the way.

“And just when I think white doves exist
I’m told that another one of my blackbyrds had his wings clipped.”

Here’s a classic video of my 2013 D.C. Youth Slam teammates at Brave New Voices, an international youth slam poetry team competition that happens every summer, hosted by a different competing city every year. In 2013 it was held in Chicago.

“A woman’s status as trick, treat or geek is not up for discussion
A woman dressing, acting or being should be her choice.”

Elizabeth Acevedo was one of the three D.C. Youth Slam Team coaches during my tenure on the team and is now working on another book to follow “The Poet X.” Huge inspiration.

“My mother tells me to fix my hair.
And by fix, she means straighten, whiten.”

G. Yamazawa was a mentor to us on the D.C. Youth Slam Team and a known trailblazer in the Slam scene coming up. He is now world touring with his one-of-a-kind hip hop music.

“We all crack under peer pressure
But once you see that there are earthquakes coming from your faults
You realize how deep trembles are felt.”

Ayinde Sekou will appear on today’s Kojo Nnamdi Show conversation about children’s poetry and spoken word. Join us at 12:30!