Behind The Scenes With Kojo At Eden Center 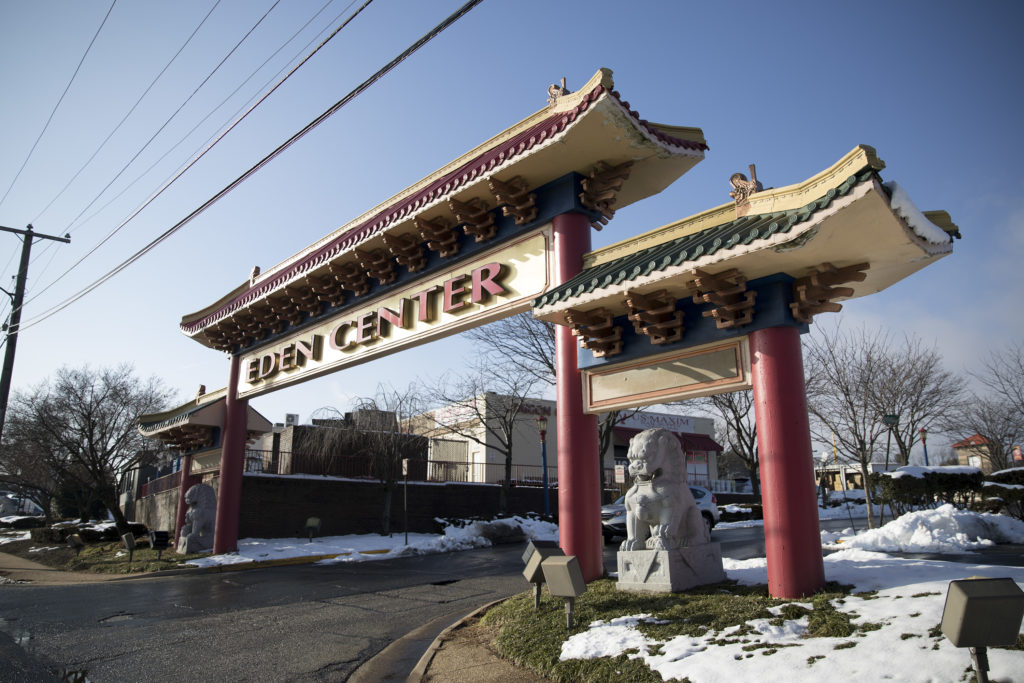 Kojo visited the Eden Center — for the past 30 years, the most important shopping center and gathering spot for the Vietnamese community in the Washington region — for the first time recently. He wanted to learn more about the businesses and people that make Eden Center unique.

We spent an entire day at Eden Center filming, and we were made to feel right at home by all of the local shop owners, all of them excited to share their stories with us. Here’s a peek behind the scenes.

9:30 am: Kojo’s advance team of producers and camera crew arrive at Eden Center. We jaywalk across untold lanes of traffic to get the perfect shot of the Eden Center’s beautiful Lion Gate. We then set up shop in the parking lot to capture the famous clock tower, which is a replica of the clock tower in Ben Thanh Market in Ho Chi Minh City. 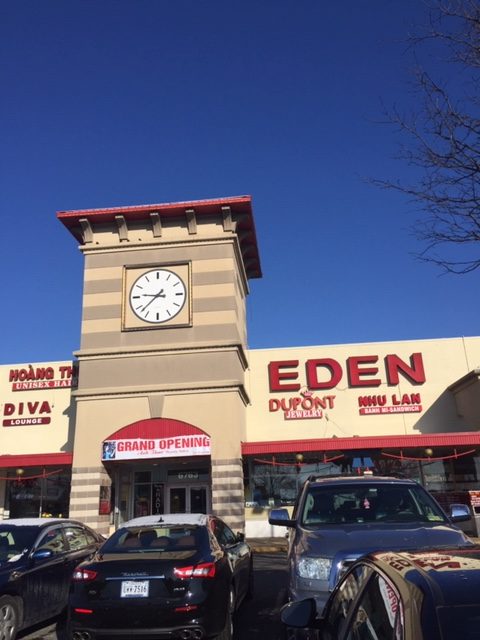 10:00 am: We head to Dupont Central Jewelry to interview Vicky Hoang Tu, who has owned the business with her husband since they fled Vietnam decades ago. Eden Center is famous for its jewelry stores, and Vicky explained how their shop has endured through the many changes in the shopping center. At the end of the interview, Vicky has a surprise for us: a CD of songs that she wrote. One of them — which is about Eden Center becoming a home to her — is the background track for all of our social media teasers for this video. 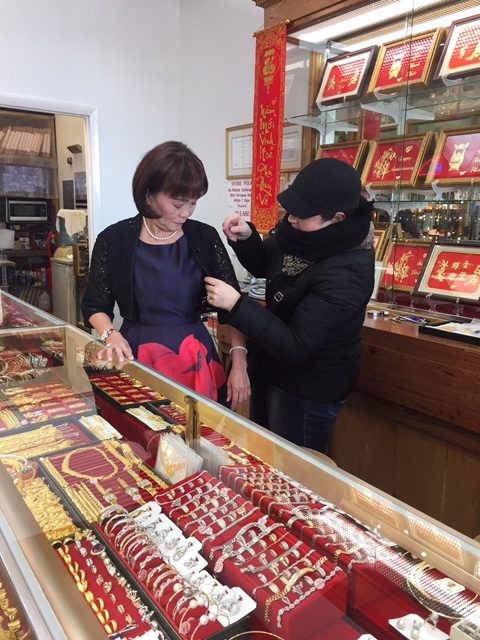 11:00 am: We whisk Kojo off to Saigon West — one of Eden Center’s indoor mall complexes — where we explore the storefronts and meet up with Quang Le, the general manager of Huong Binh Bakery. Quang educates Kojo about the centrality of Eden Center to the local Vietnamese community. Eden Center is also steadily attracting a wider variety of Asian businesses and customers: Quang and Kojo conduct their interview in front of Kao Sarn Thai Street Food, which opened a few years ago. 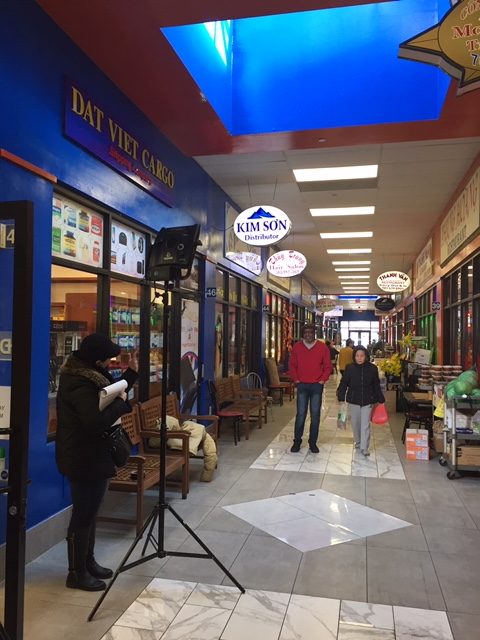 12:00 pm: We follow Quang to his bakery, where Kojo interviews Quang and his dad, Anh Le. The bakery is packed with customers shopping for all the essentials as the community prepares to celebrate Tet, the Vietnamese New Year. Our camera equipment feels…elephantine. There was so much foot traffic in the store that we had to close it down while Kojo interviewed Mr. Le.  The long line of customers who congregated at the front entrance weren’t particularly star-struck, and less than amused by this delay in their busy Tet shopping sprees. 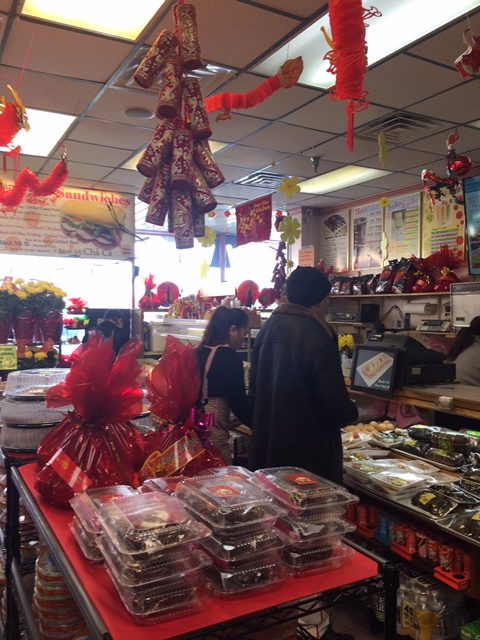 1:00 pm: We’ve all earned our lunch, don’t you think? There’s no better place for a meal than the Eden Center. There are about seventy eateries here, from amazing hole-in-the-wall banh mi sandwich shops to traditional sit-down spots, featuring everything from noodle soups like pho and bon bo hue to spring rolls and seafood and spit-roasted meats. We head over to Four Seasons Restaurant for a family-style Vietnamese feast.

1:45 pm: And now for something completely different: a visit to TeaDM, a bubble tea shop with an EDM playlist. Kojo interviews owner Jay Tran, and tries bubble tea for the first time ever. 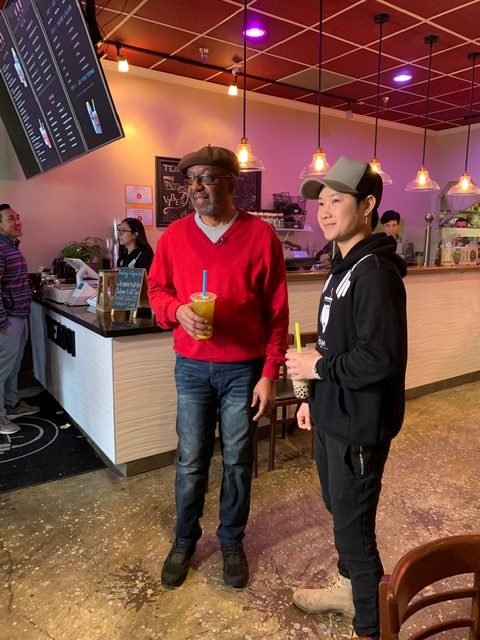 3:00 pm: Our food extravaganza continues at Rice Paper, whereowner Mai Lam shares her family’s journey of transforming her parents’ jewelry store into one of Eden Center’s most popular restaurants. She shows Kojo how to make a spring roll (three times in fact; we had to get the shot right). The crew was more than happy to make sure none of the props went to waste when Kojo finally got the hang of rolling a spring roll. 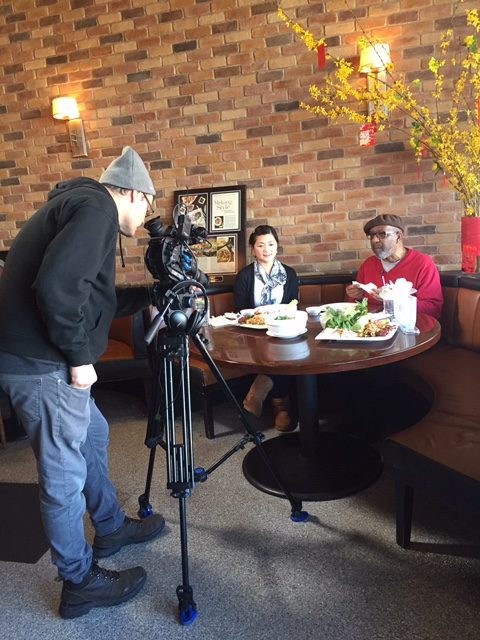 5:00 pm: We pay a visit to Kieu Untalan, the owner of Magic Cut Hair Salon. She tells us about taking over the business from her sister, and about her hopes that she’ll be able to pass it on to another family member when she retires. 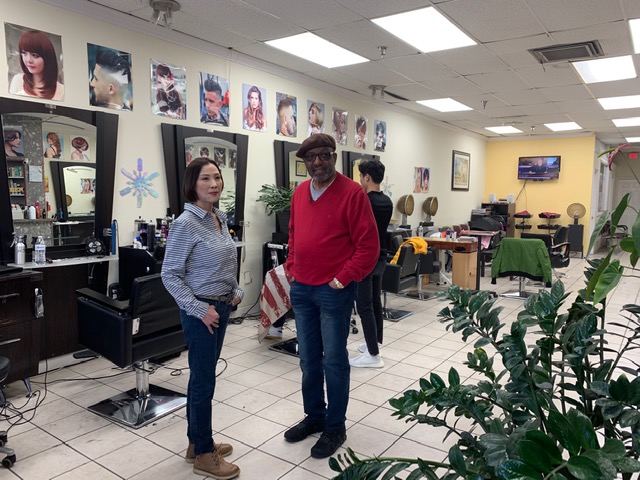 5:30 pm: Kevin Tran, the owner of Eden Supermarket, tells Kojo that Eden Center is a destination for the VIetnamese community — it’s not rare for him to serve customers who have traveled from as far away as North Carolina and New York on the weekends. One of Kevin’s employees does a double take when Kojo walks through the door: he tells us he learned English listening to The Kojo Nnamdi Show. 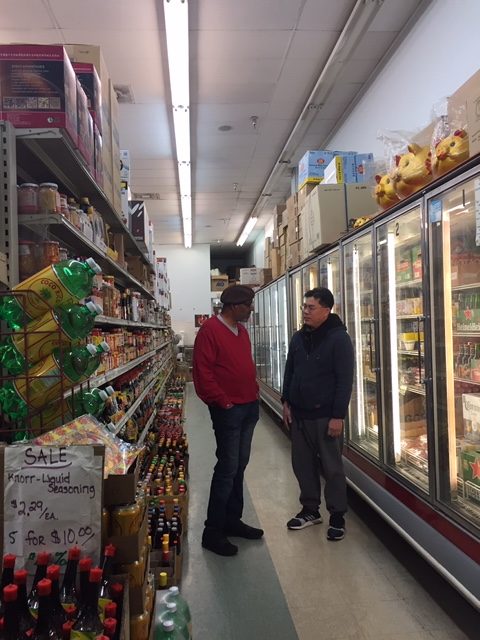 6:00 pm: We finish up at Eden Supermarket…and can’t resist guzzling down another one of Jay Tran’s strong Vietnamese coffee-themed bubble tea drinks before we go. Hopped up on caffeine (note to self: even a Venti latte with an extra shot has nothing on Vietnamese coffee), we head back to Saigon West to shoot some more b-roll. It’s nearly closing time for most of the stores at the Eden Center and there are fewer shoppers, but it’s far from quiet: firecracker noisemakers, decorations for Tet, line corridors of Saigon West, and they’re loud enough to startle even the most stoic cameraman.

7:30 pm: It’s a wrap. No comment on whether or not the Vietnamese coffee kept us up all night.

Learn  more about the history and future of Eden Center in a recent two-part series from DCist.