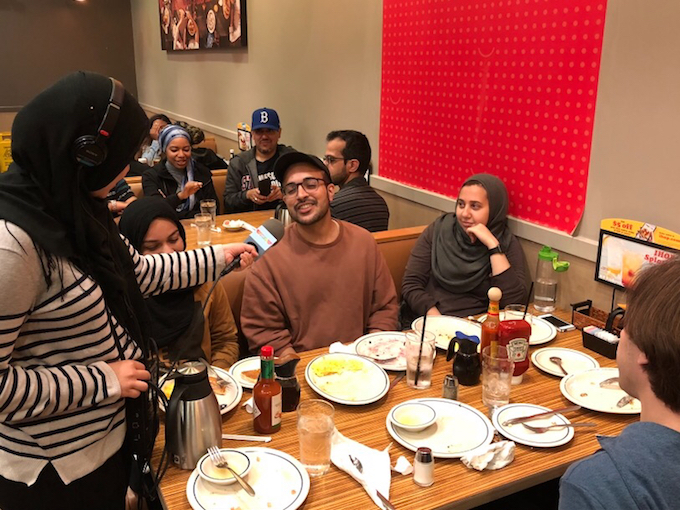 Dayana Mustak,a producer on the Kojo Nnamdi Show, talking to local Muslims during an early morning meal at IHOP in Columbia Heights.

At 3 a.m., while most people are sound asleep, Muslims observing Ramadan are crawling out of bed and getting ready for suhoor –the pre-dawn meal before a day of fasting. During an American summer, this can mean up to 17 hours without food or drink. For many Muslims, suhoor is a meal often shared with family while growing up. But moving to a new city or living alone may leave some Muslims craving company to share this very early morning meal with. And that’s where the seemingly unlikely pairing of 24-hour chain IHOP and Ramadan starts to make a lot of sense.

I have fasted for Ramadan since I was about seven, and I have fond memories of my dad taking me out to McDonalds for suhoor back in Malaysia, where I grew up. But the idea of going out for suhoor with friends never really occurred to me until I came to the United States for college. It was only then that I learned about my American counterparts’ affinity for IHOP during Ramadan. Though I never took up their invitations to venture out to a nearby diner in the early morning, the idea of a stack of fluffy pancakes before a long day of worship always sounded intriguing. So, last Sunday morning, I made my way out to the IHOP at Columbia Heights to chat with local Muslims about this modern tradition.

Farha Tahir says that going out for suhoor with others is meaningful to many because if they grow up Muslim, they’re probably used to suhoor being a communal meal. “It’s nice to know that you have a community that you can go to and share suhoor with, because a lot of us grew up with our families making suhoor and having it together every morning. So this is a way to kind of create that for ourselves away from home,” she said.

Even if you’ve never fasted for Ramadan, it can be challenging to be diligent about meal-prepping. Going to IHOP is also just a more practical option for some. “I started going to suhoor outside the house actually back when I was in grad school, and the reason I did was just because it was really hard to prep breakfast at home and do a lot of grocery shopping,” says Zoheb Nensey. “It was just easier to just let someone else worry about all of that, especially when it’s early in the morning and you’re tired.”

While I spoke to local Muslims in the District, Ramadan nights at IHOP are a nationwide tradition. “Living in Los Angeles, going to IHOP was part of my Ramadan tradition, especially for Eid celebrations,” says Jihad Saleh. “When I moved to the District, man, I lived my first, I think, seven years in the District without an IHOP, so me and friends would have to go to Northern Virginia to get to an IHOP.”

Zaheer Maskatia, who is originally from California, says “even where I’m from, [IHOP is] one of the only places that’s open 24 hours.”

Particularly in areas where an IHOP is located close to a mosque or an Islamic center, the pancake house sometimes sees an influx of late night visitors and plan for Ramadan accordingly. “They know us, they love us. Whenever Ramadan comes around, they are ready for us,” says Maskatia.

For some like Usra Ghazi, trips to IHOP are part of her Ramadan experience but they’re an even bigger part of Eid, the holiday that marks the end of the fasting month. Why? “Mostly because I value my sleep,” she says. “Coming to IHOP for Eid and after the Eid prayers is something that’s very special to me. It’s a ritual and a tradition that I’ve created with my friends, especially being away from my family.”

That Sunday morning, as some of my fellow Muslims were huddling together in an IHOP booth and sharing with me where they go for nightly taraweeh prayers and where they were planning to have iftar –to break their fast– that week, the restaurant was bustling. We were mostly accompanied by high school prom-goers and other people who must have been hungry after a long night out. Personally, I found the idea of eating at IHOP between acts of worship surrounded by people who probably woke up with hangovers the next day slightly humorous. But I wasn’t the only one. Sameer Siddiqi also pointed out this contrast:

“Sometimes you’re coming straight from nightly prayer services, you’re coming from really like reflective spaces that are very Ramadan-focused and you enter into … depending on where you go, into a very nightlife-y area, and it can be somewhat jarring. But IHOP is weirdly in the middle in that regard, it’s more cosy and comfortable.”

And it really was surprisingly cosy and comfortable. Despite not knowing anyone I met that morning beforehand, I felt welcomed and honestly had a good time. Sure, the cacophony of the restaurant wasn’t quite what I was used to, but I couldn’t help soaking up the atmosphere –one that was so uniquely American and Muslim.