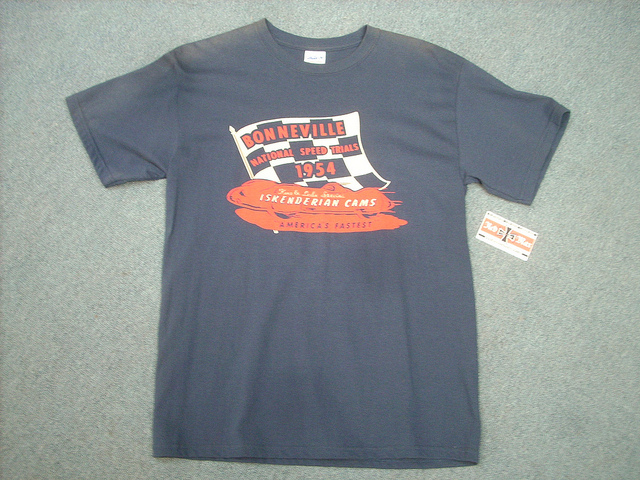 Inspired by Thursday’s chat with Emily Spivack about her collection of “sartorial memoirs,” we decided to gather the stories behind some articles of clothing imbued with meaning from our staff. 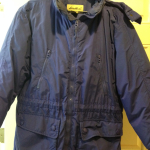 I bought this Eddie Bauer coat in 1996 to insulate myself from the harsh Chicago winters I’d be experiencing as a Northwestern University graduate student.

I always felt a little like Barney, the big purple dinosaur, whenever I pulled it on. But in 1997, I was thankful for it: While doing a reporting project in the Chicago housing projects, I was attacked by a man wielding an ice pick, who stabbed me in the head, neck and back. Luckily I wasn’t seriously injured, partly because “Barney’s” downy filling protected me.  I haven’t worn Barney much since, but out of respect, I can’t seem to part with him, either. 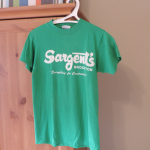 My grandfather had impossibly strong hands, the hands of a man who built things. He used his skills to found a construction company-turned-hardware and home store in the city where I grew up.

Successful for decades, the business had slowed and he was scaling back by the time I turned 14. But as soon as I did, my grandmother brought me to City Hall to obtain a Massachusetts work permit and I started my first job in his hardware store.

In my four years there, I learned a lot of useful stuff: How to interact with customers, mind a register, safely wield a packing knife and make keys. All handy skills, but decades later I am most grateful for that time spent shoulder to shoulder with my grandfather. Both he and the store are gone now, but I’ll never, ever part with this T-shirt. 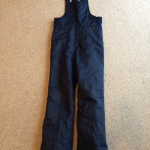 With a blizzard heading for Boston and the chance of significant snow in D.C., I found my mind running a quick check on the location of these snow pants, which I’ve had since high school. They’ve been down the blue diamond runs at Squaw Valley in my years right after college. They’ve been cross-country skiing in Vermont when I was a newlywed. They helped me dig out from a blizzard that dumped three feet of snow in Ithaca, New York.  They’ve built many a snowman in the front yard with my boys.

Happily, I know exactly where they are: in a basket on a shelf in the mud room. That’s where I found them over Thanksgiving when my niece from California wanted to make a snow angel in our backyard. She stepped in, zipped up, and headed outside to spread her wings. 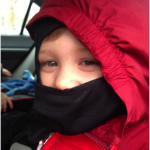 Before January 2014, if you asked me about the clothing items that had deep personal meaning to me, I probably would have talked about old music tees and hoodies that connect my adult-self to my teenage punk rock days. But the most important and meaningful article of clothing in my family right now belongs to my 4-year-old son, Liam.

Last year, he was diagnosed with asthma. It’s triggered by seasonal allergies and winter colds that just don’t seem to go away on their own. So his allergist recommended that he spend the entire winter with a balaclava.

It’s a relatively cheap article of clothing (you can spend more than $40 on some kids’ ski masks, but we opted to buy a generic adult’s mask for half that). He loves it because it makes him look like a ninja. And so far it has worked out pretty well.

But it’s also become a sort of focal point for my parenting neuroses. If I forget it, I feel so incredibly guilty, like I am letting him down and inviting calamity. Which is absurd. It’s just a piece of cloth that keeps the air going into his lungs slightly warmer than it otherwise would be.

But parenting a kid with asthma involves so many variables that are out of your control. I can’t help it that it’s freezing outside. I can’t help it that his daycare is a petri dish of coughs and colds. But I CAN make sure he goes out with this one item of clothing, which might just help a little bit. 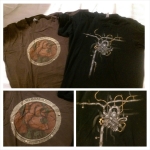 Cardiology is kind of my thing. I’m not a doctor or anything, but I have had two open heart surgeries, which is not something most people under the age of 30 can boast.

Perhaps because heart disease is a topic usually associated with grim prognoses and chronically ailing grandparents, I tend to serve as a foil to the typical heart patient. And because I have a good sense of humor about it, I have become a magnet for all of the heart-related jokes that pop into peoples’ heads, but which they’ve never had a chance to say.

In short, I embrace my cyborg heritage. And thus I am the regular recipient of t-shirts festooned with steampunk hearts and spring-wound engines of various kinds.

While I appreciate my friends’ support of my status as a part-man, part-machine, I do wonder: Who else is buying these things? 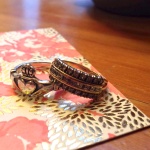 Of all the obvious similarities between my paternal grandmother and I—our incredible height, long legs, and nose, among others—people often mentioned our hands first. They’re almost identical, save the 63 years between us: Long and delicate with strong nails, slim fingers and a certain curve that suggests elegance and grace (Don’t be fooled: I’m deceivingly clumsy).

You should hand model, people would say. Aside from that outrageous suggestion (no offense, hand models of the world), this always made my grandmother laugh. Why on earth are people looking at our hands?

I think the same thing. But it’s funny:  Some of my earliest memories are watching hers race across the keys of her Steinway upright piano.

“You’ve got my piano hands,” she’d croon to me as I learned to play, three years with her, 10 years in formal training, another four earning a degree. Compared to many people (with the exception, of course, of the likes of mechanics and farmers), I’ve spent an unusually long time just staring at my fingers. By extension, I spent a lot of time looking at hers. Neither of us were ever much for rings. She wore her wedding ring, of course, and as an Irish girl, she’d always worn a Claddagh ring, long before she was married and long after my grandfather died. Though they clicked on the keys when she played — a faux pas for which I’d be reprimanded as I advanced in my own study — she never took them off.

Earlier this year, after she died, the ring became mine. Clicking and all, I leave it on: Whenever I play, we’re still playing together. 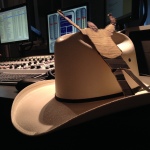 There are times when a radio station needs a little levity.

I can never predict exactly when I’m going to need the cowboy hat that I keep in my desk area. I just kind of know the moments when I see them.

The Team Kojo Cowboy Hat ™ was procured when Kojo visited Colorado for the Democratic National Convention in 2008. It sat in his office, unused, for years.

One day in the winter of 2013, I decided to pick it up and wear it around the old WAMU 88.5 building on Brandywine Street, just for kicks. It’s stiff and white, the kind of thing a good guy in a Western film would wear. I can’t say it made me feel like a hero, though, because pretty much everybody who saw me wearing it laughed at me.

But I liked that I was drawing smiles from people. I took a photo later that day with Kojo, I in the hat and he wearing one of his trademark berets. We looked like characters from a buddy cop movie. When I posted the image to Facebook and watched the “likes” rolling in, I knew I was on to something: That goofy hat makes people happy.

Since then, I’ve broken out the official Team Kojo Cowboy Hat ™ any time I feel the mood in the building needs a pick me up. It lightened up the atmosphere on the final day of broadcasting at Brandywine Street, and during the stress of the station’s big move to Connecticut Avenue later that day. When our D.C. primary night coverage dragged on late into the night last spring, I donned the cowboy hat in the control room. The cheap chuckles and the extra sips of caffeine gave us all the positive energy we needed to continue the broadcast as we rode on past midnight.

The Boston Red Sox once famously made the phrase “cowboy up” a bullpen mantra. As an Orioles fan, I’d never suggest that our radio station borrow or copy anything from the Sox. I’d rather think about what the late Hunter S. Thompson once said: When the going gets weird, the weird turn pro. In our case, a weird cowboy hat sometimes brings out our best work on the air. Turning pro, indeed.