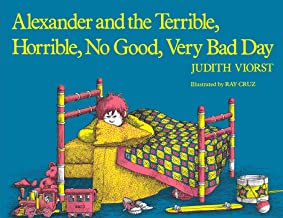 Book cover of "Alexander and the Terrible, Horrible, No Good, Very Bad Day," by Judith Viorst, which has sold more than 7 million copies since it was first published in 1972. Courtesy of Simon & Schuster

“Alexander And The Terrible, Horrible, No Good, Very Bad Day” is an iconic book for children, having sold more than 7 million copies since its 1972 publication. It was written by Judith Viorst, a Washingtonian who is joining Kojo to give us the scoop on the real Alexander (her youngest son) and the other characters in her universe of kids’ books.

There’s Lulu, who wants a Brontosaurus for a pet, Sophie, who is “super-completely and totally the messiest” and the unnamed girl who tells her parents that a gift of earrings would do wonders for her posture.

What’s your favorite Judith Viorst book? What do you want to ask her about writing? Do you have any suggestions for her next book?