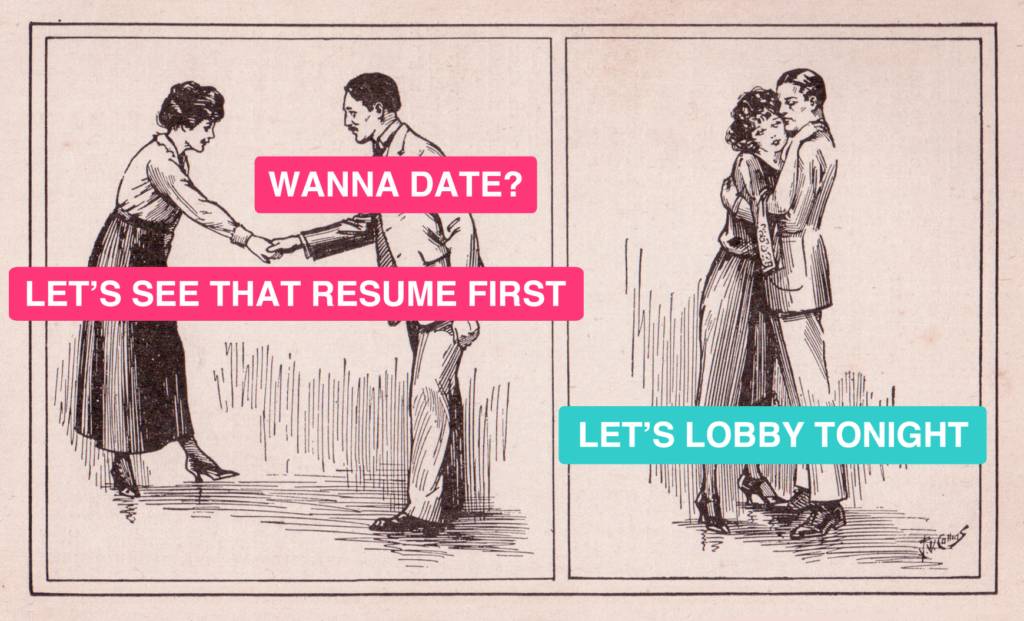 As a 15-year D.C. resident, and a dating coach of eight years, I can tell you more than a few things about dating in Washington. Some of these will come as no surprise –people here work too much?!– and some might surprise you. Let’s discuss D.C.’s top dating myths and whether any of them hold water.

(Hint: They don’t. The only thing holding water here is the Reflecting Pool.)

This is common, but it doesn’t really make D.C. all that unique. In most major cities, “What do you do?” is a natural question to ask. If not first, then it’s a close second or third. While out west, people may start by asking about your outdoor activity preferences (hiking, biking, rock climbing, etc.), they’ll then want to know what you do to see if you even have time for these activities! The point is that no other city is doing it “better.” Just remember that it’s a first date, not an interview, so if you plan to ask what someone does for a living, please make sure it’s out of genuine curiosity and not with the sole purpose of sizing someone up. That’s where the frustration with this question often lies, as WAMU’s Martin Austermuhle reported in 2016.

2. Everyone in D.C. is either a lawyer or consultant

That’s just not true! This myth likely depends on the diversity you see in your own social circles. Yes, there are a lot of lawyers and consultants in D.C. But, there are also plenty of people out there who don’t fit that mold. Doing a quick scroll of Bumble, I see a board game company executive, real estate developer, journalist, bartender, doctor, software engineer and teacher. I know it’s convenient to blame a lack of job variety as a reason dating is “no good” or “no fun” in D.C., but if you look, you’ll find the variety you’re craving.

3. People aren’t looking for anything serious

I hear this one all the time. “The men here just want to date casually.” Or, “The women here are too picky and are looking for an 11 even if they find a 10.” For every example of someone who won’t commit, you’ll find an instance of someone who wants to commit too soon. In essence, you can find examples of anything you want to corroborate your story. The truth is that when someone wants to commit, he or she will — regardless of where they live.

4. Everyone is more obsessed with politics than anywhere else

Interest in politics doesn’t really set D.C. apart. I’ve had clients in many of the 50 states (red and blue), and within the last two years, there has been a huge (even tremendous?) uptick in the number of people who want to know their potential partner’s political affiliation. The sheer number of profiles that say something to the effect of “If you’re a Trump supporter, swipe left,” or, “If you’re a fan of the current administration, we are not a match” has increased exponentially, not just in D.C., but everywhere. Here are a few fun facts, reported by WAMU’s Mikaela Lefrak:

Sure, we’re all busy, as we’ve already established. But, if you have time to go to the gym, text your friends and binge the latest season of Ozark, then you have time to date. It’s all about your priorities. I don’t actually believe in the expression, “I didn’t have time.” It’s really “I didn’t make time.” As I find myself telling clients on repeat, people are fairly transparent—they make time for the things they want to do and don’t make time for the things they don’t want to do. So, if someone will not make time for you, that’s okay…just find someone else who will.

D.C. can be a great place for dating, as long as you come to the table (or bar, as it may be) open-minded and not presuming the outcome before you have a chance to assess it. Will you have some bad dates? Sure. And some great ones? You bet. Will either be a function of the fact that we live in D.C.? Probably not. Rather, it’ll be due to your chemistry, your willingness and your priorities.