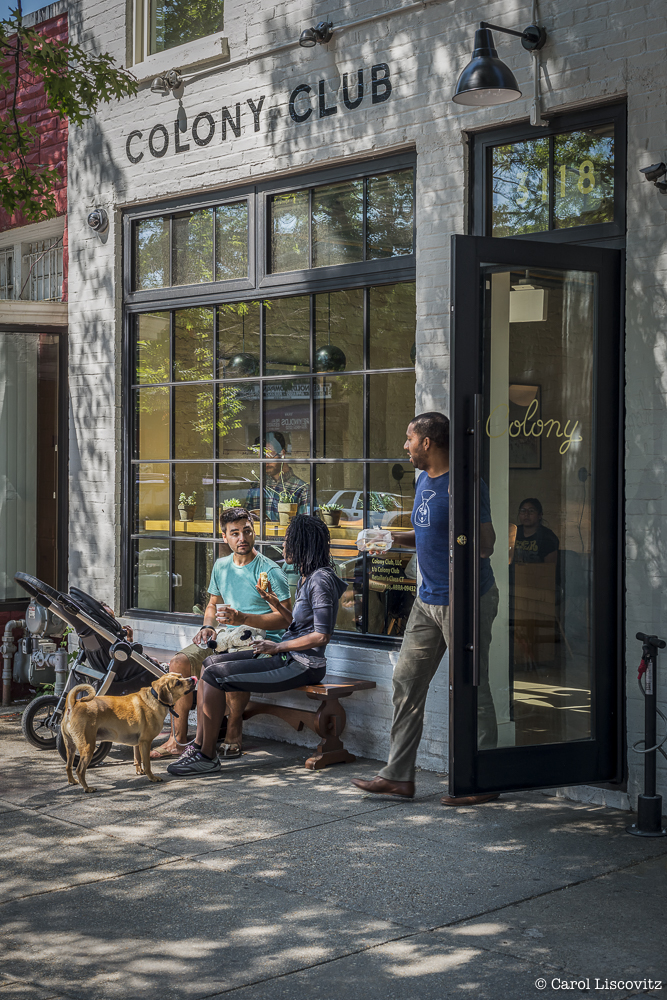 During a recent Kojo Show conversation about the ripple effects of D.C.’s gentrification, guest host Jen Golbeck asked local experts if rising housing costs were leading to deeper poverty in Wards 7 and 8. During the show, guest Kymone Freeman, a co-owner of We Act Radio and contributor to Anacostia Unmapped, singled out Colony Club, a coffee shop and bar on Georgia Avenue, for driving gentrification. Even if a business like Colony Club has “good intentions,” Freeman called its name “extremely offensive,” and said, “the people that patronize this bar…are clueless to what that really means.”

Max Zuckerman, the owner of Colony Club, happened to be listening, and Producer Avery Kleinman spoke with him recently.

Avery Kleinman: What’s your response to the comments Kymone made on-air?

Max Zuckerman: Well, first of all I listened to the program and I thought it was overall really interesting and a bunch of really good points were brought up by Kymone. Really the reason I felt strongly about responding is that gentrification is an issue that personally I care a lot about and being in the neighborhood that we’re in, it’s actually something that comes up all the time. It’s actually a really common topic amongst the staff and customers that come in.

I can’t speak for every single customer but I would say overall it doesn’t seem to me like our customers or our staff are oblivious to what’s going on around them. I would also say there are a bunch of assumptions that [Kymone] makes in those comments.

If he did come to visit the shop and talk to the customers and neighbors and everything, I think he would actually get a very different impression than how he portrayed it.

I think our staff and our customers are a pretty diverse group of people from all types of backgrounds and we try pretty hard to be good community members. As far as I can tell pretty much everyone in the neighborhood is glad to have us there and we know our neighbors pretty well. I’m talking about people who have lived there since they were little kids.

I understand the confusion with our name and it’s unfortunate. And I see the connection he’s making between what he thought was our name and what he’s saying about gentrification. But the reality is our name is actually a reference to my grandparents’ flower shop that was also on Georgia Avenue, half a mile or so up the road in the Park View area. The name was intended to be a nod to my family and also a nod to the rich history of the neighborhood and the street and all of the interesting things that have happened there and people who have lived here.

Avery: Why did you decide to open Colony Club at that specific location?

Max: I had been wanting to open the shop for a while and I knew that I wanted to open in a place where we were going to have a positive impact on the community. The building we went into was vacant when we leased it out and it just seemed the neighborhood at the time was lacking in good places for people to gather socially or just hang out and do work by themselves. There were already a couple of bars you could go to at night, but the place we wanted to be was really the kind of meeting place where people could talk about issues exactly like what we’re talking about now.

Avery: Before hearing Kymone’s statement on air, were you aware that some people see your shop as a symbol of gentrification?

Max: Certainly. I think gentrification is a complicated thing and I think it tends to get a little bit oversimplified sometimes. I think there are some good things that come with gentrification and a lot of the people who have lived here a long time would say that they’ve been able to benefit a lot from the changes. At the same time there are a lot of negatives that need to be thought about and dealt with. To answer the question, we are certainly aware of that impression.

I would like to think that we work towards a situation where, while we might be a symbol of gentrification, we hope that we are a positive one.

We do our best to bring a positive to the neighborhood and hopefully the good that we do outweighs any negative.

Avery: What are you as a business doing to mitigate the negative impacts of gentrification and encourage the positive ones?

Max: I think there’s a little bit of a chicken-and-egg scenario. I think businesses go to where they think they are going to do well and I think people tend to move where there are businesses that they like. But, yes, I think its undeniable that we are part of a gentrifying process in this community. We are certainly not a charity by any means, but we try to support causes that we care about. To that end we donate to a bunch of neighborhood groups, whether its groups that get together to do neighborhood cleanup, or there are a bunch of neighborhood civic associations that we give space to meet in. Another thing we focus on is the way that our staff treats customers. We try to make sure that everyone is being treated well and fairly. We do also try to have a range of things on our menu that are hopefully a low barrier to entry price-wise.

Avery: Is getting to know the longtime residents of Georgia avenue and the community there important to you as a local business owner? How do you do that?

Max: For me personally it’s important and I think our staff really enjoys it too. Being a coffee shop, you’re a part of a lot of people’s daily routines, so you get to know people pretty well. I also happen to live in the neighborhood so I see the same people all the time.

Some of the customers that come in are people who have lived in the neighborhood since they were little kids.

It’s gratifying and it makes you feel like you are part of the community and your business is serving our intended purpose: to be a cafe, but also to serve as a social community gathering place for people.

Avery: Back to the name, can you explain again why you decided to call your coffee shop Colony Club? And did you think about the negative connotations people might draw from that name?

Max: The name Colony Club comes from my grandparents’ flower shop. I think it was just called Colony Flower Shop. And that was actually named after a theater on the same block which was named the Colony Theater, and all of the little businesses around the theater were named “The Colony Blank”. If you actually go up there, there’s still the Colony Liquor store, there’s the Colony House apartment buildings. Certainly I’m aware of the negative connotations of colonization and imperialism. I suppose it did cross my mind that there could be, for me, what feels like a bit of a stretch or a leap to make a connection between a cafe opening in a neighborhood that is gentrifying. But I felt what was more important to me is that when people ask about the name, we have what I feel is a good reason for it and a good story behind it. And I felt like whatever negative feelings people had about that name, we would convince them otherwise by our actions and by being positive community members.

This interview has been edited for length and clarity

Is Gentrification Causing Poverty To Grow East Of The Anacostia River? – The Kojo Nnamdi Show