An Open Letter To Washington State From The State of Washington, AKA D.C. 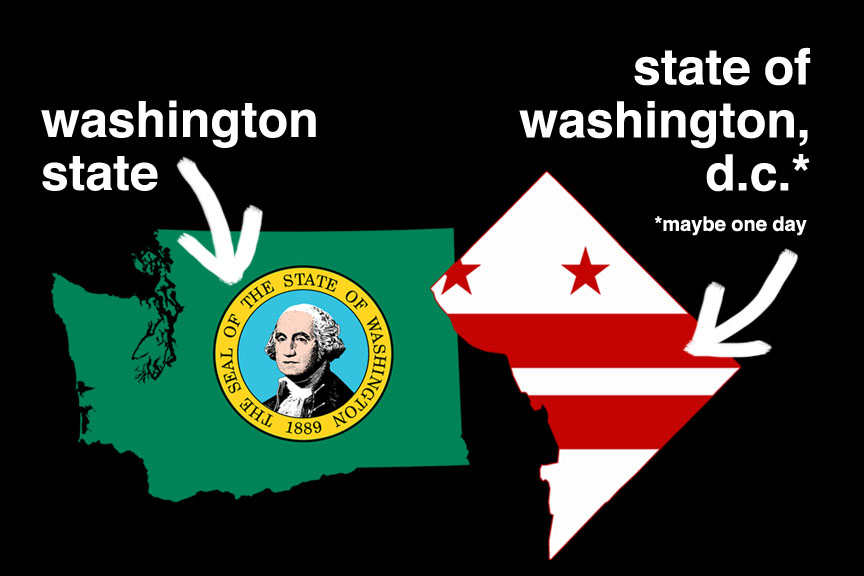 This year, the issue of D.C. statehood will be on voters’ ballots in November. And, if D.C. ever succeeds in becoming the nation’s 51st state, it will be known as the State of Washington, D.C. (with the D.C. referring to Douglass Commonwealth instead of District of Columbia). While the name didn’t exactly thrill D.C. residents, it definitely didn’t charm Evan Bush, an enterprise producer at the Seattle Times who published a column titled, “Dear D.C., you can’t call yourself ‘State of Washington.’ That’s our name.” There’s enough confusion over the two Washingtons already, wrote Bush, citing popular complaints about the nation’s capital. At the Kojo Nnamdi Show, we host some of D.C. proudest residents –let’s call them Washingtonians. One of them, our political analyst Tom Sherwood, had something to say in response.

Apparently the drizzle in the Seattle air has clouded your West Coast thinking.

We get to choose our name like any other state jurisdiction. There are two Carolinas and two Dakotas, why not two Washingtons? No one will confuse the two. You’re way out there in another time zone. Enough said. We’re here at the center of the world’s greatest democracy.

But here’s the rub: Right now we are not part of that democracy.

Like many who don’t really know us, you conflate our 670,000 residents with the dysfunctional reputation of “official” Washington — the Congress, White House and federal government. Bash ’em all you want, but leave us out of it.

When it comes to regular citizens, the nation’s capital is the most un-American place in America. Our local government exits at the whim of Congress. Its members can overturn the most mundane local law passed by our 13-member Council and signed by the mayor. Yet, we don’t get to elect any senators and our lone delegate has limited voting power.

It should be a fundamental right of all Americans — even the much-maligned ones who reside right here in the nation’s capital — to participate in our democracy.

It’s past time we be included.

Our new name, though admittedly a mouthful, honors Frederick Douglass, a great advocate of civil and human rights.

So be proud of your coffee, your internet prowess and for being a state 127 years.

We’re the seat of democracy and are tired of knocking on the door.

No matter what you call us, let us in.

Have questions about D.C.’s statehood initiative? Read WAMU reporter Martin Austermuhle’s explainer, or hit him up on Reddit for the nitty gritty details.