What Business Do D.C.’s Elected Officials Have Going To The Iowa Caucuses? 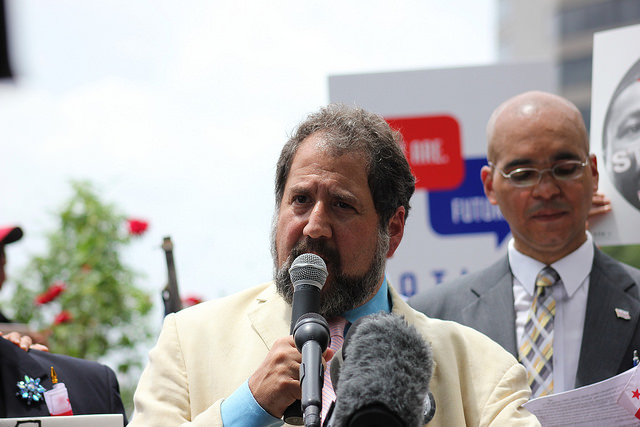 Iowans will participate in the first nominating contests of the 2016 presidential campaign on Monday. Most Washington residents will be observing the Iowa caucuses from afar, but a group of public officials from the District’s “shadow” delegation are traveling there to generate support for D.C. statehood: Sens. Michael Brown and Paul Strauss and Rep. Franklin Garcia.

Producer Michael Martinez spoke to Strauss, who’s traveled to Iowa before in the name of D.C. voting rights,  about the trip – and what his group plans to achieve for local D.C. when everyone else is fixated on the presidential election.

Why are you going to Iowa?

This is really the culmination of an effort that began almost a year go to engage people outside of D.C. in the fight for statehood. The average American might think people in Washington, D.C. are more influential than the typical American, but as we know, we’re actually less empowered. The folks with the real clout are the caucus voters out in Iowa because of their “first in the nation” status in presidential elections. I went out last year and was welcomed by the Polk County Democratic Committee, which is one of the biggest organizations in the state – and they passed a resolution the following March where they promised not just to support D.C. statehood but to make it part of their Democratic caucus process.

What does it mean for D.C. statehood to be a part of the caucus process in Iowa?

Picking candidates is only part of what Iowa voters will do. They discuss issues. They’ll establish a platform.

Why is Iowa important to your national strategy?

What’s made the Iowa activity unique so far is that Iowans have kept their word. They didn’t just say they would support us. They’re supporting us. Iowans for D.C. Statehood is a group of Iowans who are going to try to get as many precincts to introduce and pass resolutions in support of D.C. statehood.  There are real grassroots activists who are engaged on this.

What would constitute success for you on Monday?

We want to be in the platform of both parties in Iowa. Donald Trump, who seems to be the Republican frontrunner, is not hostile to the idea of D.C. statehood. When our fellow Americans learn of the plight and they start to understand it, they’re almost uniformly for us regardless of party or ideology.

Have you had success engaging with presidential campaigns directly?

Yes –in terms of getting candidates to articulate their positions. Many candidates have been asked this question directly by Iowa reporters. We’ve had a strategic effort to get all the candidates on the record. On the Republican side, only Donald Trump has been somewhat supportive. We believe all three Democrats are supportive, Bernie Sanders in particular –he answered the question specifically on an Iowa talk show. He pointed out that D.C. has more people than his own state, which was a particularly helpful perspective for him to give.

You’ve had some success recently getting Hollywood actors and celebrities to endorse D.C. statehood. Are any more celebrity ally announcements coming in the weeks ahead?

We’ve had good conversations with many celebrities, but we don’t go public on these things until we have them in the can. We don’t count our chickens before they hatch. The enthusiasm in Hollywood for this cause continues to grow. We’ve got a “51 Stars Campaign” going, and we’ve got celebrity commercials that are running in Iowa. Do you watch “Breaking Bad” or “Better Call Saul?” We’ve got one with Jonathan Banks one that will air this weekend on KIWC and ABC 5 over there.