The Ultimate Primer For The New Star Wars TV Shows, Books And Comics

By The Kojo Nnamdi Show Staff 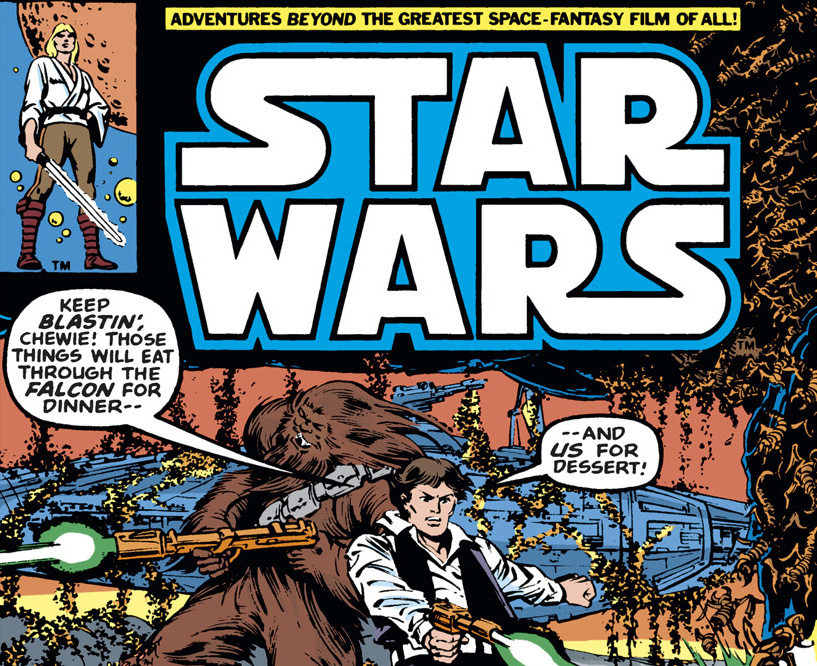 The cover of a Star Wars cartoon from 1979. Tom Simpson

So you’ve seen all the Star Wars films multiple times but really wish that there was more out there besides this little movie coming out called “The Force Awakens.” Good news, there is tons out there and even better, it’s all a part of the grand Star Wars story! From television shows to books and comics and more – there’s a little something for everyone. The sheer number of new Star Wars content can be a little overwhelming so let’s start with the basics.

Wait. There are television shows? Yes! “The Clone Wars” follows Obi-Wan Kenobi, Anakin Skywalker, and his new padawan Ahsoka Tano over the three years between Episodes II and III (yes, you read that right: Anakin had a padawan!). The animated show, which originally aired on Cartoon Network, really delves into the long war that the films mostly glossed over and introduces viewers to more Jedi, clones and tons of others across the galaxy. You can watch all five seasons on Netflix including three story arcs from what was going to be season six.

Airing right now on Disney XD is “Star Wars: Rebels” which follows a brand new crew of, well, rebels who have a fantastic family-like rapport. It’s created by the same team who worked on “The Clone Wars” and tells some incredible stories as they fight against the Empire, years before “A New Hope.” A few significant characters even make appearances throughout, including both favorites from “The Clone Wars” and a certain Dark Lord of the Sith.

Del Rey and Disney Publishing have been publishing at hyperspeed over the last year and a half.

It should definitely be said that while these books are written for younger readers, adults can definitely enjoy them too. Fans of “Star Wars: Rebels” may also love the “Servants of the Empire” series that ties directly into series.

In the original Star Wars trilogy era, Disney Publishing has not only released retellings of all three films by Alexandra Bracken, Adam Gidwitz, and Tom Angleberger but also three brand new stories about our heroes: “Moving Target” by Cecil Castellucci and Jason Fry follows Leia on a dangerous but incredibly important mission, “Smuggler’s Run” by Greg Rucka features Han and Chewie against the Empire, and Luke Skywalker learns more about the Force in “The Weapon of the Jedi” by Jason Fry.

There’s essentially never been a better time to start reading Star Wars comics as Marvel is rocking it with every book. Star Wars and Darth Vader are both ongoing series that start after “A New Hope” and occasionally intertwine. The main book follows our heroes while the other follows Vader (obviously) and an awesome new character named Dr. Aphra who’s like a mirror image of Indiana Jones. There have also been three limited series – only five issues each – that star Princess Leia, Lando, and Chewbacca.

“Shattered Empire” stars Shara Bey (the mother of Poe Dameron) as she continues flying against the Empire and features some neat appearances from Han, Leia, and Luke. Like “Aftermath,” it really sets the stage for what the galaxy is like as the Empire crumbles.

For fans of the two animated shows, “Son of Dathomir,” published by Dark Horse and not Marvel, was based off of unused scripts for The Clone Wars and stars Darth Maul. Kanan, currently being published by Marvel, tells the story of Kanan Jarrus when he was a young padawan at the Jedi Temple in the final days of the Clone Wars. It’s one of the best comics out there right now.

Thus far, both “The Force Awakens” novelization by Alan Dean Foster and “Before the Awakening” by Greg Rucka are due out on Dec. 18th. The latter is an anthology that looks at the lives of Finn, Rey, and Poe before the movie. Coming in January is a comic miniseries about Obi-Wan and Anakin in the early years after they become master and padawan. You can also look forward to “Bloodline” by Claudia Gray and the next two books in Chuck Wendig’s “Aftermath” trilogy: “Life,” “Debt,” and “Empire’s End.”

And that’s it! It may seem like a lot but you can absolutely pick up just one of these and enjoy it on its own without having to worry about being lost. It’s a big galaxy out there in the Star Wars universe and it’s just waiting for you to go exploring.

Note: Everything released after April 2014 – along with the six (soon to be seven) films and “The Clone Wars” TV show is considered “canon.” Canon means that it is officially considered a part of story of Star Wars. In other words, something that happens in a book set a few years after “Revenge of the Sith” may end up affecting the galaxy in a comic set around the time of “The Force Awakens.”