Dreams Do Come True: Kojo Nnamdi And Tom Sherwood Are Getting D.C. Tattoos Together

Dreams do come true. And sometimes, they work out even better than you ever imagined.

The backstory: a few years ago, I arm-twisted our political analyst Tom Sherwood to go along with a gag we contrived for membership campaign pitching during the Politics Hour –something a little edgier than promising tote bags or travel mugs. We agreed that if we received an individual gift of more than $5,000, Tom would get a D.C. flag tattoo like the one his son Peyton has.

No one ever took us up on the deal. We’d re-up the promise every fall and winter campaign – if for nothing else, it gave us something fun to talk about on the air. One time, I even drew a D.C. flag tattoo on my forearm with a Sharpie just to get in the spirit. But the golden donation always evaded us. 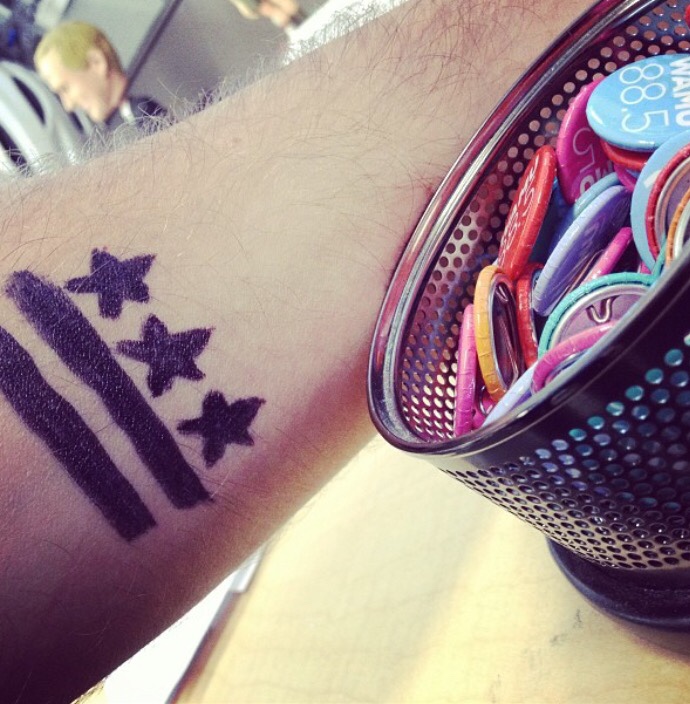 At some point in the past year or so, I started to lose faith. But Tom’s insistence on reviving his promise each new campaign convinced me that he actually wanted a donor to follow through – that he secretly wanted to get that ink this entire time. He even agreed in a recent campaign to lower the threshold of the required gift to $3,000.

That faith was finally rewarded today, when we received a sustaining gift of $3,000 a year.

.@kojoshow at 1:01 pm, a donation came in for $3000. Research is taking place to find out the donors intention.#pledgewamu

But here’s what makes it even better: Kojo agreed to get a tattoo himself, as did our in studio guest, D.C. Council Member Mary Cheh.

As of this moment, we don’t know when they’ll be getting their ink done or where they’ll be doing it –though Bethesda Tattoo has already offered to donate its services to the cause:

“We’re big fans,” said Cynthia Pascal of Bethesda Tattoo who promised the services of tattoo artist Matt Wojciechowski. “We don’t have the money to donate, but we can give tattoos.”

While the appointment hasn’t been made yet, this much I can promise you: we will be there with every social media tool available so that you can experience it in real time. Others might even be inspired to join them.

In the meantime, we can celebrate. This is a victory for public radio. For D.C. And for anyone who’s ever dared to dream big.

I could quit today, and I'd be going out on top. This is the culmination of YEARS of work. I'm on #pledgeWAMU CLOUD NINE.

#DCStatehood #DCPride & an opportunity to support @wamu885 -so many good reasons to get a #DC flag tattoo w/@tomsherwood and @Nnamdikid!

This is sorta amazing. https://t.co/Dw1VtyaA1i

Keep dreaming and Kojo on, y’all.

Update: Kojo, Tom and council member Mary Cheh were tattooed on Friday, Nov. 20. View photos and video from the event.