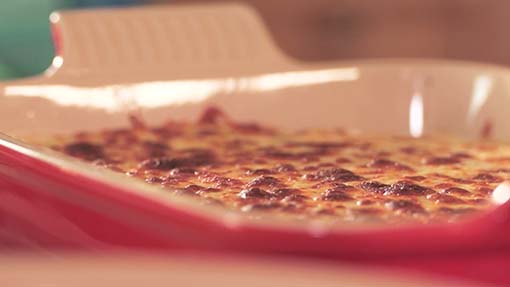 Chef Pati Jinich grew up in Mexico City on a steady diet of Jewish and Mexican cuisine and culture. When she moved to U.S., she went from being “undeniably Mexican to being someone who unexpectedly didn’t conform to people’s expectation of what it meant to look and sound Mexican,” she wrote on NBC Latino. After moving to Washington D.C, and working at a think tank, Jinich found herself reconnecting with Mexico through food. She now has her own TV series -now in its fourth season- and her own cookbook. Jinich will join The Kojo Nnamdi Show on Wednesday, April 15, at 1 p.m. Try her recipe for chicken and salsa verde tamal casserole.

For the tamal dough or masa:

1/2 teaspoon kosher or coarse sea salt, or to taste

To make the tamal dough or masa: Place lard, vegetable shortening or seasoned oil in an electric mixer and beat until very light, about 1 minute. Add salt and 1 teaspoon of cold water and continue beating until it is white and spongy, a couple more minutes. Add the baking powder and then alternate adding the instant corn masa and the chicken broth a little at a time. Continue beating until dough is homogeneous and as fluffy as can get. You know the tamal masa is ready when you can drop 1/2 teaspoon of the masa in a cup of cold water and it floats.

Grease a large baking dish with oil. Spread half of the tamal dough or masa in a single layer over the bottom of the baking dish. Set aside 3/4 cup of salsa verde and combine the rest with the shredded chicken. Spread the chicken and salsa verde mix on top of the masa. Cover with the rest of the masa in a second layer. Cover with aluminum foil and place in the oven for an hour.

Remove from the oven. Carefully remove the aluminum foil and spread on the remaining 3/4 cup of salsa verde. Top with the cream and cheese. Place back in the oven, uncovered, for 10 more minutes, or until the cheese completely melts and begins to brown along the edges. Serve hot, cut into squares.

2 serrano or jalapeño chiles, or more to taste

1 teaspoon kosher or coarse sea salt, or to taste

Place the tomatillos along with the garlic cloves and chiles in a pot and add enough water to cover. Place over high heat and bring to a boil. Reduce heat to medium and simmer for about 10 minutes, or until the tomatillos change in color from bright green to a pale green, are cooked through, and are soft but are not coming apart.

Transfer the tomatillos, garlic, chile (you may want add only 1 chile at first), and 1/2 cup of the cooking liquid to a blender and puree until smooth. Incorporate the cilantro leaves, onion and salt and process again. Taste for salt and add more if need be. Also taste for heat, you may add the other chile in pieces until you reach your desired heat level.

In a medium saucepan, set over medium heat, pour the oil. Once hot, pour in the salsa verde, bring to a simmer and cook for 6 to 8 minutes until it thickens a bit and deepens its flavor and color. Turn off the heat.

Allow to cool to room temperature and serve. Or, once it cools down, you may store it in a closed container in the refrigerator for weeks.