Behind The Scenes Of The Capitol Steps 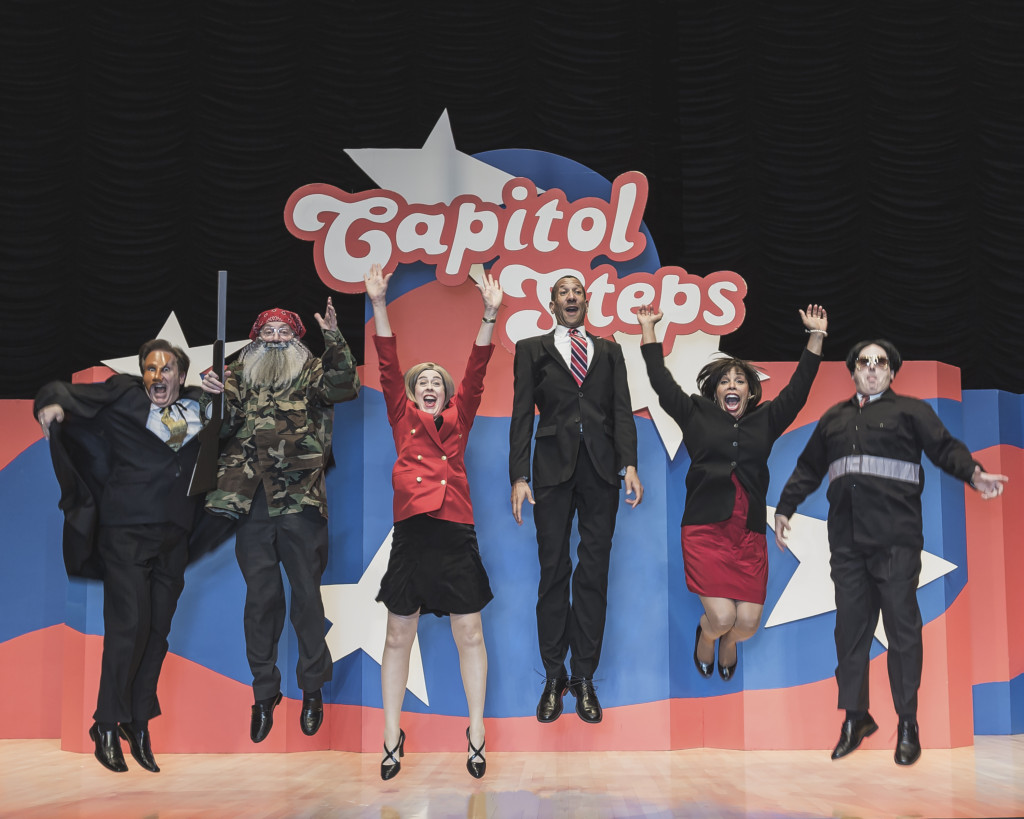 The Capitol Steps comedy troupe is made up of current and former Capitol Hill staffers. (Photo/Mike Reyna)

A Q&A with Elaina Newport, a founding member of the Capitol Steps, a comedy troupe including many current and former Hill staffers who’ve been satirizing Congress with skits, songs and parodies since 1981.

TELL US A LITTLE ABOUT “CAPITOL STEPS” AND WHAT YOU DO?

The Capitol Steps started as entertainment for a Senate office Christmas party.  We were all working for Senator Charles Percy at the time.  We had hoped to put on a traditional nativity play, but in all of the Congress we couldn’t find three wise men or a virgin.  So, we wrote some song parodies and performed them at that party.  That was the early days of President Reagan…and now we’re performing every Friday and Saturday at the Reagan Building, so that seems fitting.

HOW’D YOU END UP IN THE CAPITOL STEPS?

Well, it wasn’t intentional, really…I thought I had a serious career on Capitol Hill.  But after that first party, we got invited to do some more parties…and basically, no one told us to stop, so 33 years later, we’re still at it.

MOST STEPPERS – IS THAT THE RIGHT TERM? – ARE FORMER OR CURRENT STAFFERS ON CAPITOL HILL. WHAT DRAWS A STAFFER TO THE STAGE AND COMEDY?

It’s the modern-day equivalent of running away to join the circus. But I think it also goes deeper.  When you’re on the Hill, you’re dealing with big problems and issues all day, it really helps to step back and laugh.  This is true not just for Hill staffers, but anyone watching the news.

A RECENT REPORT SUGGESTS THAT PAY AND MORALE ARE LOW AMONG STAFFERS…  IS THAT NEW?

When I first started on the Hill, in 1981, I remember my salary was $12,500. That’s annually.  But I was so excited to be there.  And even after some promotions and getting to the point where I made a whopping $29,000 (seven years later)…I was still able to make ends meet.  You know why?  Because back then, I had lunch almost every day with a different lobbyist.  That was perfectly OK under the ethics rules at the time.  So, it’s much tougher today.  Darn ethics!

LOW PAY, LOW MORALE… WHY WOULD ANYONE WANT TO COME TO CAPITOL HILL AS A STAFFER?

Today, the only reason to come to work on the Hill would be the delusion that you could accomplish something.  That might not last long.

IF STAFFERS WERE ALL WELL-PAID AND HAPPY WOULD THERE BE A “CAPITOL STEPS”?

When we first started, we were actually worried about losing our day job.  We had this recurring nightmare that someday, we would be up for some promotion, say, an undersecretary position that required Senate confirmation, and someone would ask: “Is it true that back in 1981 you made fun of the President?” and our career would be over.  But then we realized, this WAS our career.

WHAT IS YOUR REACTION TO THIS QUOTE: “Bradford Fitch, president of the Congressional Management Foundation, said: ‘Congress was the only branch of government which actually cut its own budget by 20 percent between 2011-2013.’”

They could cut it more….it’s not like they would get less done.

WHAT KIND OF FODDER IS CONGRESS FOR COMEDY?

Well, you have to understand, I no longer look at things like a normal person would.  Now that I am full-time with the Capitol Steps, when I hear a news story, I don’t think “Is this good for the country, or bad for the country?”  I think “Is it funny?  And what rhymes with it?”

When the Capitol Steps first started, we worried that the Congress would get quietly competent and solve all the problems.  We worried about that for maybe five minutes.

WHAT’S THE WORST THING ABOUT BEING A HILL STAFFER?

In my case, it took time away from traveling around the country with the Capitol Steps, making fun of the Congress!  So eventually, they noticed I was not showing up enough at my day job, and I had to decide to do this full-time.

WHAT’S THE MOST OUTRAGEOUS EXPERIENCE YOU HAD AS A STAFFER?

I remember we were working on funding for a nuclear research project, some kind of particle accelerator at a university in the Senator’s state.  It meant a lot of jobs and we were trying to get several million dollars added to an appropriations bill.  So, the Senator brought up his amendment in a crowded committee room, and another Senator asked him, “So, how does this thing work?”  And the Senator turned to me, like I would know how a nuclear particle accelerator works!

About the Capitol Steps:

The Capitol Steps began as a group of Senate staffers who set out to satirize the very people and places that employed them.

The group was born in December, 1981 when some staffers for Senator Charles Percy were planning entertainment for a Christmas party. They decided to dig into the headlines of the day, and they created song parodies & skits which conveyed a special brand of satirical humor. In the years that followed, many of the Steps ignored the conventional wisdom (“Don’t quit your day job!”), and although not all of the current members of the Steps are former Capitol Hill staffers, taken together the performers have worked in a total of eighteen Congressional offices and represent 62 years of collective House and Senate staff experience.

Since they began, the Capitol Steps have recorded over 30 albums, including their latest, How to Succeed in Congress Without Really Lying. They’ve been featured on NBC, CBS, ABC, and PBS, and can be heard 4 times a year on National Public Radio stations nationwide during their Politics Takes a Holiday radio specials.